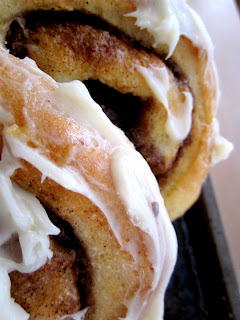 Cinnamon rolls?  Yes, of a fashion.  But so much more.  It's a swedish tea ring. 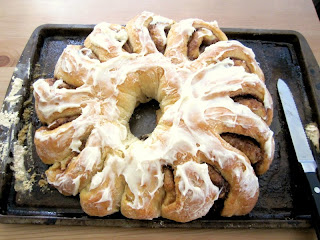 Vaguely shaped like an Oregon coast sunstar (colloquially known as "those goddamned big starfish"), the Swedish tea ring is a pastry that is mostly cinnamon roll but all awesome.  I do realize that cardamom would make this even more Swedish, but I didn't want to experiment with guests on the way.  Same goes for nuts.  This could use some serious walnus.  Swedish tea rings are also awesome because you can easily cut one into smaller-than-average slices of cinnamon roll goodness, thus encouraging guests to consume more of it.

I dislike bready, sweet leftovers.  One day of indulgence is enough for me.  Rest assured, these are incredibly decadent.  Topped with Tofutti cream cheese frosting, tender, and oozing with sugary cinnamon filling, this goodness is outrageously sugarly but not so much tha you get that fuzzy sugary tongue feeling.  Which is even more dangerous, because it's easy to eat 2-3 slices. 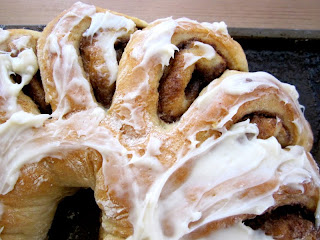 There were only a couple "rolls" left at the end of Rockband night, so that's a win.  Om nom.

I really think it would make great French toast.  That'll be next time. 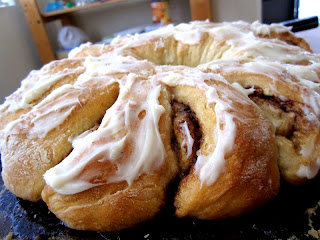 It's a spaceship - it's a starfish - it's a Swedish pastry out of controllllllllll.
Posted by Melissa K at 3:57 PM 2 comments:

My grandmother makes the best peanut butter mochi.  Soft, sweet, with a crunchy peanut butter mochi filling.  It's perfect.
When the boy got the box of mochi flour wet (pressing tofu for dinner, he meant well), I knew it was mochi making time.  I made some plain for soup, and also some of an experimental sort... 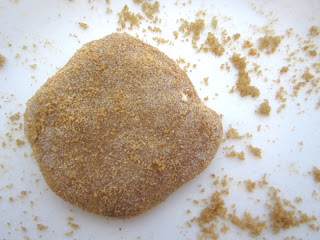 Chai mochi!
Mildly sweet, gently spiced, the recipe needs a bit of tweaking before I can post it...but I'm excited to perfect it and share these spiced mochi with family and friends. 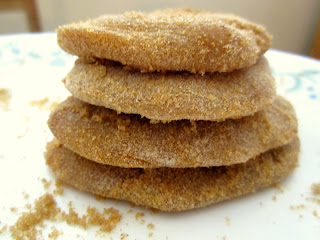 A nice piece of mochi chilled is so refreshing on a hot summer day... 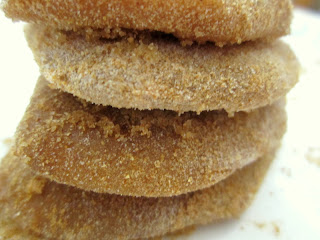 To be continued.
Posted by Melissa K at 3:55 PM No comments:

The sprawling cherry tomato plant is producing handfuls of these every day: 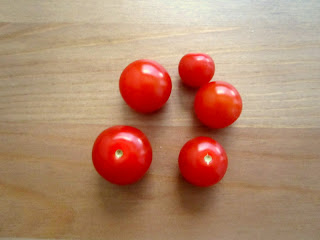 They're so sweet and flavorful - way better than the weeks-old refrigerated tomatoes found in grocery stores. We've been neglectful, but the plant is still producing lots of fruit.
We also have nectarines from the farmers market... 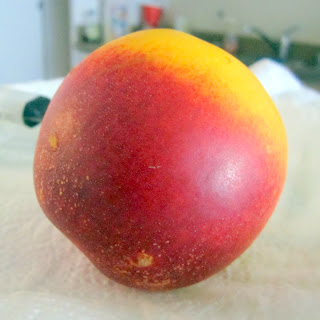 Still not sure what cherry tomatoes are good for except salads and snacking... 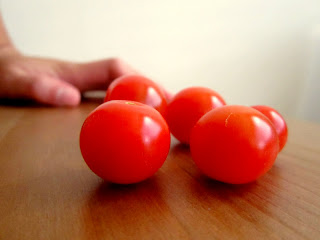 I miss Dave's Killer Bread.  Farmer's market fresh, complete with free samples... oh man.  Really delicious.  The recipe for basic whole wheat bread is available online complete with step-by-step video instructions straight from Dave himself here!  I make this recipe everyone once in a while, but this time I made a messy braid of it: 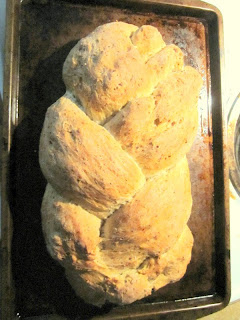 This recipe makes a lovely, dense soft loaf.  I added flax and a handful of cracked wheat to the basic recipe, and it turned out really tasty and hearty.  Perhaps it would make good french toast? 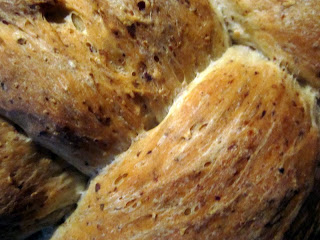 My awesome friend and I have been exchanging packages this last year or so.  She is so awesome and has sent me amazing baked goods and random thrift store finds and all sorts of things!  This time I remembered to take pictures! 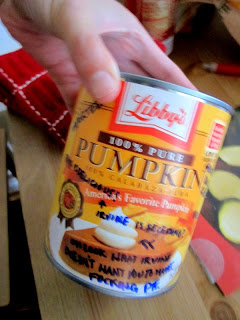 She sent pumpkin puree!  We haven't had this around here since last Christmas, so this is a real treat.  I'm so excited,  I don't know what to make first.  Pancakes?  Muffins?  Pumpkin cheesecake?! 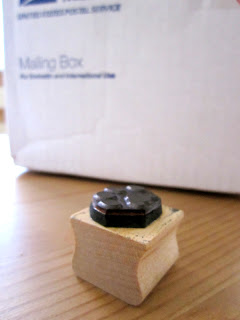 And a pawprint stamp.  Time to get some markers/ink and graffiti something up. 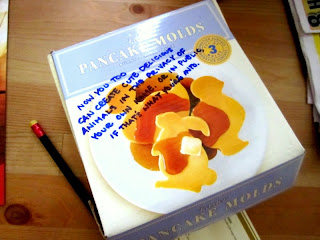 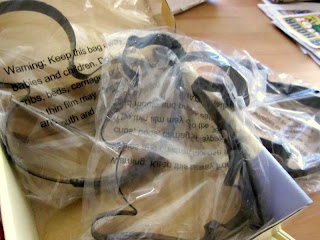 She's always trying to get me to eat animals ;-)  These are pancake molds, but I was thinking it might be cool to use them to make tarts too?  Especially since we have peaches and cherries and berries this time of year.  I wonder if they are oven safe...
So, thank you for the mail!  Time to have some fresh killer bread...
Posted by Melissa K at 7:33 PM No comments: 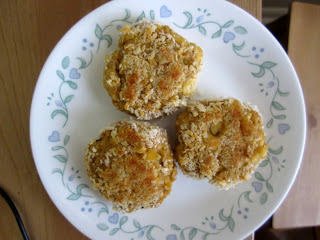 With a half block of old tofu in the fridge, I figured it was time to try making something that's been on my mind for a while: crab cakes, veganized.  The idea emerged from this somewhat strange stuff: 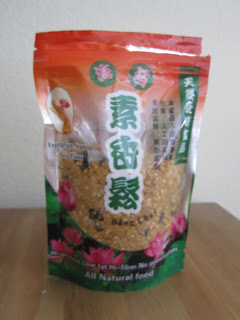 Soy floss?  A coworker gifted me this bag of "soya floss" a few weeks ago, and I've been determined to make something with it besides "soy floss on rice."  It is a little like textured vegetable protein with bits of seaweed and sesame seeds in it and is a lot like furikake in flavor and function.  It also happens to taste a lot like fish.

I mixed some of this soy floss with crumbled tofu, a bit of lemon juice, some panko, oatmeal, paprika, salt, and then formed them into patties.  I coated the patties in panko, then baked.  If I was serving these to guests, I would have probably fried them, but they came out crispy and tasty even from the oven: 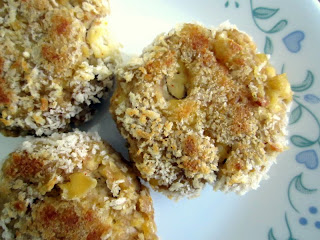 I still need to tweak some things.  Soy floss : tofu ratio must be increased.  More/different seasonings.  Probably more oil.  But, if you manage to see soy floss (I'm told it's a rare product) you might give it a try. 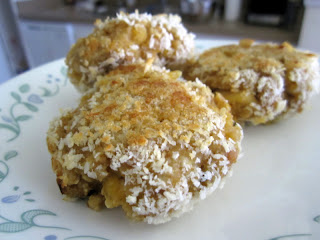 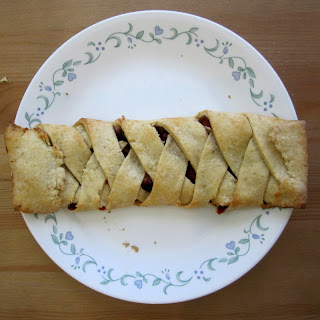 This is a riff on gifflar.  It's the same recipe, except the filling is a mix of peaches and pluots. 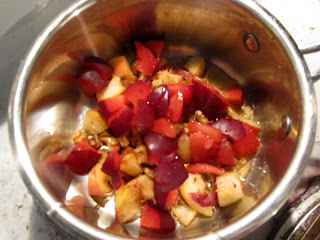 First, I made the gifflar pastry dough as usual, then let it rise.
I put some pluots, a white peach, and chopped walnuts in a pan with a good 1/4 cup or so of agave nectar, some cinnamon, nutmeg, and cloves, a pinch of salt, and the tiniest bit of pepper. 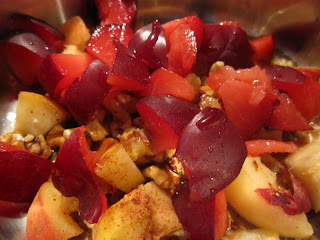 Cooked it down into a chunky saucey filling.  I divided the pastry dough into two balls, rolled each one into a rectangle, added the filling, then braided the dough.  Alas, I don't have pictures from this process.  The result is a streudel-like pastry that has a crust slightly flulffier than a pie. 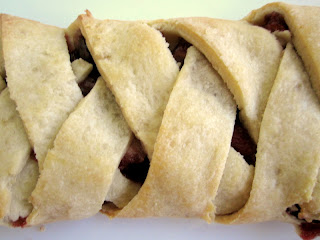 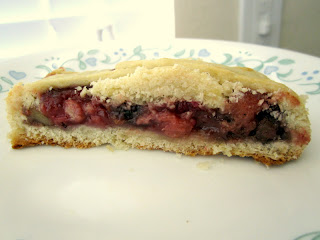 The filling up close.  I love the tart pink pluots.  We got them from the farmer's market. 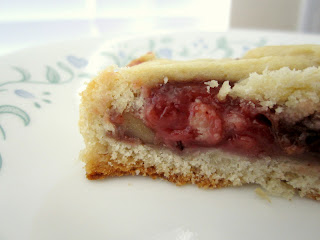 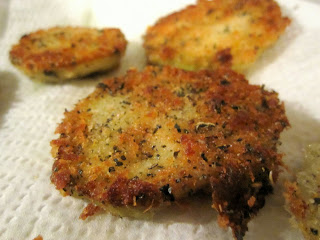 I pester people about what to cook.  It's a horrible, annoying thing to do, and I'm trying my best to curb it.  I ask the boy what he wants for dinner, I ask other people what the hell I should make with x ingredient before it turns to mush.  It's pathetic, and I apologize.  So when the question was, "Eggplant: Chinese or Italian?" the response was: "..." and "Italian."  So...Eggplant parmigiana it is.

Although fried food is not the healthiest thing, eggplant parm is -- I think -- so, so worth it.  I made eggplant the other night by slicing it very thin, making a simple flour-and-soymilk batter, then dredging it in a mix of panko (always check the labels, since sometimes panko has egg/milk), herbs, salt, pepper, and nutritional yeast. 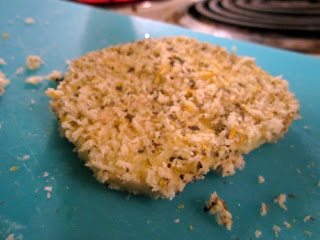 It's ready for frying!

I fried the eggplant in a thin layer of oil until golden brown.  Topping some simple pasta with a makeshift spinachy tomato sauce resulted in: 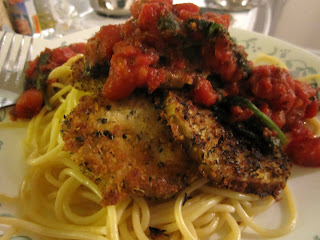 A plate of easy weeknight food.
Posted by Melissa K at 4:00 PM No comments: